Rajma Masala (indian red kidney beans curry) is a dish native to Northern India, but is one of the more popular and loved dishes across the country. Because there are few things as comforting and hearty as a plate of Rajma Chawal.

And so in this rajma recipe I have shared the ingredients and the instructions to make this rich, creamy, tangy and spicy curry at home, so that you can feast on this delicious delight any time you want.

That being said, like most Indian dishes, there are many ways Rajma Masala is made, with variations not only in taste, but texture and consistency too. Which is why, I have shared some known modifications and variations in the notes, so that you can mold this recipe to suit your preferences.

But essentially Rajma curry is made by simmering soaked and boiled rajma/kidney beans in a rich, creamy onion and tomato based curry, along with select spices and herbs to bring out the delicious, hearty flavor of this dish.

This might sound like more work than it really is, but like you will see in the recipe, this dish is pretty simple and easy to make, and you can always double batch and store this.

In-fact, I’d highly recommend doing that, as this is one of those dishes that taste better the day after it is made, once the rajma beans have had the chance to sit in the curry, and absorb all the flavourful spices.

Moreover, this is one curry that goes equally well with roti, naan, and/or plain steamed rice. So take your pick, and pair it with your favorite kind of indian flatbread or rice, and enjoy!

How to Make Rajma

2. Drain all the excess water in the morning & pressure cook the rajma beans with fresh water for 4 whistles.

The goal is to get rajma beans soft enough that they will not have a bite, and will melt in your mouth instead. So after pressure cooking, the rajma beans must be soft and mushy when pressed but otherwise still hold form. If this means 5 or more whistles in your pressure cooker, then adjust accordingly. But usually 4 is good enough.

3. Set the pressure cooked rajma beans aside, retaining the water in which the beans were cooked, as we’ll need it for the curry.

4. Then in a pan, heat up a little oil, add the chopped onions and salt, and saute till the onions start turning light golden brown.

5. Next add the ginger garlic paste, mix well, and saute for 2-3 minutes just until the paste loses the raw flavor.

6. Then add the masalas, which include rajma masala, garam masala, coriander powder, cumin powder & chilli powder. Mix well and saute for 1-2 minutes on medium heat. If required, sprinkle some water to avoid the masalas from burning.

Some people prefer to only add rajma masala, which is what I prefer too, when it’s homemade rajma masala. But when I am using store-bought masala, I always add additional spice powders to suit our palate. But they are completely optional.

7. Finally, add the chopped tomatoes, mix well, and saute on medium low flame, till you see the oil leave the sides. Then turn off the gas, and let the onion tomato spice mix cool for a bit.

8. Once the spice mix has cooled down, it’s time to puree it in a blender, along with a little water, and a few spoons of rajma beans, till you get a smooth paste like consistency.

Here adding the rajma beans in the mixie is optional. But it’s something I’ve picked from my mom, that I always do. Especially whenever I am making curries using different types of beans.

I always add a little of whichever beans I am using in the masala puree to kind of ‘marry’ the beans with the curry, so that it all comes together better. It also makes the curry more creamier.

9. Once the puree is ready – pour it into a pan. And to this pan, add the boiled rajma beans along with the retained water, some more fresh water, depending on the consistency you desire, and mix well. At this point also taste for salt, and adjust accordingly.

11. Then let the rajma curry simmer on low heat for 15-20 minutes, stirring intermittently.

The Rajma Masala is now ready to serve with roti / naan or rice.

Pro Tip: This is one of those dishes that taste better the next day, once the beans have had a chance to sit in the curry and absorb all the flavorful spices. So it makes a good candidate for make-ahead meals for the week.

1. I have pureed the onion tomato base, but this is completely optional. If you prefer a more chunkier texture, you can choose not to puree it, and add the boiled rajma to the onion tomato spice mix instead. Some even grate in the onion and use tomato puree instead of fresh tomatoes. So you can adapt the texture to your preference.

1. Check packaging date of beans. It’s best to use newer stock of red kidney beans. Look for the packaging date, and avoid anything that was packaged over 6 months ago. Fresher beans cook better and more evenly.

2. Ensure to soak the rajma beans. Soaking the rajma beans unlocks the bioavailability of nutrients and enables quick and even cooking of the beans. Which is why it’s best to pre-soak them, in-spite of the fact that there are ways to make rajma curry even if you forgot to soak the beans (listed below).

3. Cook the rajma beans really well. When the rajma beans are cooked well, they don’t have a bite, and literally melt in your mouth. Which is a hallmark of a great rajma masala.

4. Grind a few boiled rajma beans with the onion tomato base. This will help the beans bind with the curry better, and also make the curry more creamier.

How to Soften Rajma Quickly if you Forgot to Soak Rajma?

If you forgot to soak Rajma, and you need to make rajma curry, you can use either of these two methods to make almost instant no soak rajma masala.

Boil the rajma beans using a little more than double the amount of water (for ¾ cup rajma beans, use 2 cups water) till there is a proper boil. It might take 7-10 mins on medium flame. Then turn off the gas, cover the pot with a lid, and let the beans power soak in this hot water for 1-2 hours.

The end result would be the same as if you had soaked the beans for 6-8 hours.

The only difference being, I usually drain the water I soak raw rajma beans in. In this case, I do not drain the water, but use as much water is available and add more water if required for pressure cooking.

2. No Soak Method for making Rajma

In this method, you don’t have to soak rajma beans at all. Just pressure cook the rajma beans with a little more than double the amount of water (for ¾ cup rajma beans, use 2 cups water) for longer /more whistles than you would normally do. And then proceed as normal.

That being said, it’s best to use these last minute rajma hacks when you have forgotten to soak the rajma beans instead of making them common practice. Because soaking unlocks the bioavailability of nutrients more.

You can use canned kidney beans to make rajma curry. For this particular recipe listed below, you will need 2 cups of canned beans.

But I personally avoid processed stuff when I can, and prefer to soak & cook the beans from scratch because of nutritional value as well as the fact that canned beans make me gassy.

Moreover, this is easy enough to make at home. Soaking requires some advance planning, but you can always try the no-soak method shared above.

This recipe has been updated from the recipe archives, first published in 2019. 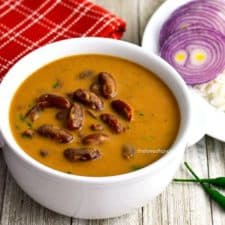 Prevent your screen from going dark

Making the Masala Base

Pureeing The Masala Base

Tried this Recipe? Tag me Today!Mention @loveofspice or tag #loveofspice!

If you’d like FREE recipes and meal prep ideas delivered directly to your email inbox every Friday in one short email, then subscribe to the Foodie Friday list HERE, and never run out of ideas on what to cook over the weekend or prep for the week ahead. 🙂

Hi there, I am Shantala, an Indian foodie in an American kitchen. Welcome to The Love of Spice - my food blog, virtual home & passion project, all rolled into one. On here I share Easy-to-Follow Family Recipes, along with tips on Indian Meal Planning & Lunch Box Ideas for Kids & Adults. I hope you enjoy the site, and find it useful. :) read more 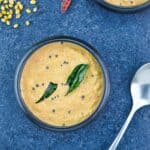 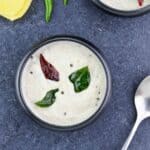 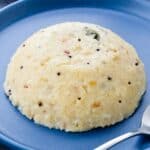 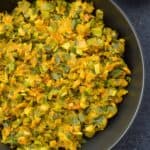 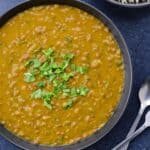 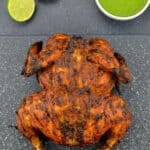 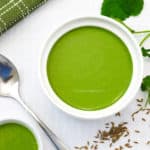 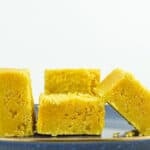 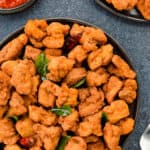 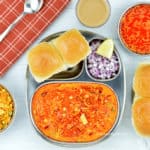